The GEMÜ 660 diaphragm filling valve was successfully introduced in the beverage industry in 2007. Its main application is the aseptic filling of non-carbonated beverages such as still mineral water. In addition to standard valve bodies, customer and machine specific special versions can also be supplied. According to GEMÜ customers, the diaphragm valves provide additional advantages when filling vessels with drinks containing delicate fruit pieces. For example, bits of orange are pushed out of the sealing joint when the valve is closed, which means that the damage rate remains very low. The video shows a simplified version of the filling process. In addition to the GEMÜ 660, the GEMÜ 650 and GEMÜ 650TL diaphragm valves and the GEMÜ 3030 flowmeter are included in the functional model. 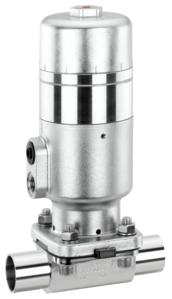